Muhammad Mahmood Alam or shortly M. M. Alam is a retired Air Commodore of Pakistan Air Force. He is a recipient of the Pakistani military decoration, the Sitara-e-Jurrat ("The star of courage") and a bar to it for his actions during the Indo-Pakistani War of 1965.
He was born July 6, 1935 in Calcutta, British India. He is popularly known as "M.M. Alam" and nicknamed little dragon. 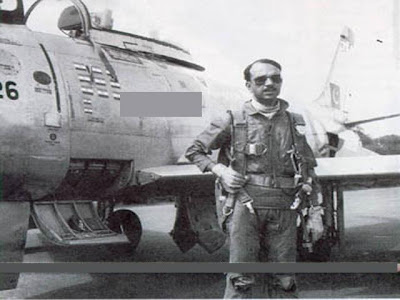 M.M Alam aka little dragon is known for his actions during the Indo-Pakistan War of 1965 when he was posted at Sargodha. During this war he was involved in various dogfights. He is officially credited with downing nine indian fighters six of them are hunters Hunters of the Indian Air Force in air-to-air combats, 5 of them in less than a minute,

as follows:
September 6, 1965, One Hawker Hunter: Squadron Leader Ajit Kumar Rawlley, No 7 Squadron, Killed in action, near Tarn Taran. September 7, 1965, Three Hawker Hunters (in one mission): Squadron Leader Onkar Nath Kacker, No 27 Sqn, POW, Squadron Leader Suresh B Bhagwat and Flying Officer Jagdev Singh Brar, No 7 Squadron, KIA, near Sangla Hill. September 16, 1965, One Hawker Hunter: Flying Officer Farokh Dara Bunsha, No 7 Squadron, KIA, near Amritsar. The Indian sources attribute Alam with only five of these kills, attributing one of the "kills" claimed by PAF, Sqn Ldr Onkar Nath Kacker's aircraft loss, to booster failure. However Indian sources claim, that if MM Alam had indeed shot down, 5 IAF Hunters in less than 30 Sec,why the Gun camera film of his fighter plane was not made public during or after the war was over & to date PAF has not shown the gun camera film. Similarly Pakistani authorities recovered the debris of only two aircraft's with the bodies of both the pilot, one a hindu & another sikh from the scene of action. The Indian source also claims that MM Alam never saw his missile hit Kacker's aircraft.
Alam was the first commanding officer of the first squadron of Dassault Mirage III fighters procured by the PAF. However he was not very popular with the top management of the PAF and was shortly removed from command, on the excuse that he was not "literate enough". During the Indo-Pakistan War of 1971, all personnel who were of Bengali origins or were born in Bengal were grounded to prevent any defections. Thus, Alam was posted on a staff job and did not fly in combat. M.M. Alam retired in 1982 as an Air Commodore and currently resides in Karachi. One of the roads of Gulberg in Lahore is named after him as M. M. Alam road. His brother M. Shahid Alam is an Economist and a professor at Northeastern University, Boston. His brother M. Sajjad Alam is a particle physicist at SUNY Albany and is credited for discovering over a dozen particles. 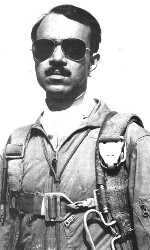 Eye-witness to M. M. Alam's Encounter with the IAF
7th September, 1965, I had the unique opportunity of seeing history being made. I shall not hesitate to accept that, ever since, my prejudices against history have weakened quite a bit.
The tension of the post Rann-of-Kutch period had increased progressively culminating in the outbreak of the Indo-Pak War. The PAF was in a high state of alert. I was then at Sargodha - the focal point of interest for the Indian Air Force. It did not take a psychologist to analyse the state of mind of the PAF pilots. Calm and resolute, quite yet zealous, they were all too keen to their teach adversaries a lesson.
Seated in the cockpit of an F-104 aircraft, I was awaiting my turn to the launched into the air. On a warning of an approaching low-level raid, some of my colleagues had already got airborne. For a short span of about half a minute we were anxious, but it was not long before we realised that the enemy had failed to deliver a proper attack and had caused no damage except to chip off a corner of a transistor-radio. They had to pay a rather heavy toll for the damage they had caused on the personal property of an officer - 4 out of the 6 raiding aircraft were shot down.
When a second in-coming raid was detected, four of my colleagues flying the F-80s and I in my F-104 were ordered to the air. In minutes we were airborne and were waiting to "great-our friends." Squadron Leader M. M. Alam with his wingman was orbiting south-east of the airfield; the other pair of F-86s led by Flight Lieutenant Bhatti was further east of Squadron Leader M. M. Alam's section and I was circling the airfield at a height of about 15,000 feet. While heading north, I spotted four enemy aircraft exiting in a south-easterly direction. I called out on the radio that I had visual contact with them and started turning in the direction of the enemy's exist. By the time I had come behind the enemy aircraft, I saw that four F-86s - two of Alam's formation and two of Bhatti's - were already chasing the Indian Hunter aircraft.
The Hunter is a faster aircraft than the Sabre: In order to close in to a firing range the Sabres had to jettison their external fuel tanks and dive down from height. Bhatti tried to get rid of his external tanks but unfortunately one of his tanks failed to jettison. It was now practically impossible for him to close the gap between himself and his prey. So, he wisely decided to let the other pair of F-86s, led by Alam, tackle the Indian aircraft. Alam and his wingman started gradually to close in on the enemy. Thought I, in the F-104, would have had no problem getting into the firing range, I thought it appropriate and fair to let Alam try his hand first. I decided to keep the Hunters in sight and trail Alam, firstly to allow him more manoeuvring area and, secondly, to be ready for any one of them who might decide to run away faster. In the heart of my heart, I feared that Alam, with his complete mastery of the F-86 and his determination to punish each one of the Indians for the liberty they had taken, would give me no opportunity. In a short while I realised that my fears were turning into facts.
Like me, Alam had also spotted only four Hunters. He decided to engage the one on the extreme right first. It was then that he spotted a fifth Hunter further to the right. He changed his mind and switched his attack to this new find. Barely a couple of seconds must have lapsed before Alam six guns were spitting fire and fury at this Hunter and I saw a ball of fire hit the ground. Alam pulled his guns on to the next Hunter. A few seconds later, another ball of fire hit the ground. Then the Indians tried a half-hearted defensive manoeuvre. Alam was almost overshooting an enemy aircraft but by then he had destroyed it - a third ball of fire and the pilot of this Hunter managed to eject from his aircraft before it crashed. Alam was once again in a better position to tackle the two remaining Hunters. It was only a matter of moments before these two also turned into balls of fire and crashed into the ground. I felt a pang of disappointment - Alam had been unfair to me. He had himself tackled them all, giving me no chance to bear my guns on to any one of them. The Indians disappointed me too. Had they just decided to run away from Alam, I would have possibly had a chance.
I checked my distance from Sargodha; it was 37 miles. This was the first time that a fighter pilot had attacked and destroyed five enemy fighters at almost tree-top level in a short span of a minute or so. A new chapter was added not only to the history of the PAF, but also to that of military aviation.
It was a great privilege to have been a witness to this encounter. The bit "Fox Hunt" started by the Indian Hunters had ended up in the "Fox" killing all the hounds but one. This one hound, I do not know how, managed to detach himself from the rest of the 'hounds' and ran back with his tail between his legs. I believe that on his return he was awarded a "Veer Chakra" for his demonstration of great courage and valour in the face of the enemy!
reference, By Wing Commander (Retd.) M. Arif Iqbal (PAF)
Scripted by: Naeem Mustafa Mahar at 12:16:00 AM