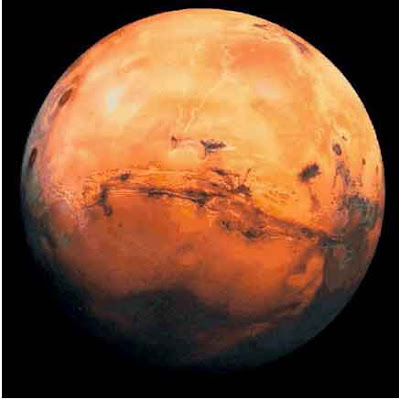 Once again it appears that a Mars hoax that has widely circulated through the Internet since its first appearance during the summer of 2004 has begun to circulate yet again. It comes in the form of an e-mail message titled "Mars Spectacular," which originated from an unknown source.
In turn, this message has gotten passed on to others who couldn't resist forwarding it to their entire address book.

The e-mail declares that on the night of Aug. 27, the planet Mars will come closer to Earth than it has in the past 60,000 years, thereby offering spectacular views of the Red Planet. The commentary even proclaims, with liberal use of exclamation marks, that Mars will appear as bright as (or as large as) the full moon.
The problem is that "Aug. 27" is actually Aug. 27, 2003. Mars made a historically close pass by Earth that night (34.6 million miles, or 55.7 million km). The Hubble Space Telescope used the opportunity to make a great photo of Mars. But even then, to the naked eye Mars appeared as nothing more than an extremely bright yellowish-orange star, not at all like the full moon.
This year, Mars is actually much dimmer and far-less conspicuous than in 2003.
You can find Mars in the early morning sky right now, however, located not far from the dazzling planet, Venus. This week, the moon serves as a guide to spotting the red planet -- and you can easily compare them to see just how different they appear in size.
"In the past, the rapid spread of this information was like some sort of brain info-virus, and led to at least one daily newspaper comic that showed Mars crashing into a home while the husband and wife were indoors, debating how close the planet will come," said Neil deGrasse Tyson, director of New York's Hayden Planetarium.
In terms of actual size, Mars (approximately 4,213 miles, or 6,780 km. in diameter) is almost twice the size of our moon (about 2,160 miles, or 3,475 km). But the great distance between Mars and Earth never allows it to appear anywhere near as large as the moon in our sky.
The average distance of the moon from Earth is 238,000 miles (382,900 km). So for Mars to appear to loom as large as the Moon does from Earth, it would have to be about twice the Moon's distance, or roughly 476,000 miles (766,000 km.).
In fact, right now the red planet remains is 189 million miles (304 million km) from Earth.
So, plain and simple, if you have already received this infamous Mars E-mail -- or eventually receive it this summer -- be advised that it is totally bogus.
Or Tyson suggests: "Now it's time for you to send this antidote to all the infected people in your address book!"
Joe Rao serves as an instructor and guest lecturer at New York's Hayden Planetarium. He writes about astronomy for The New York Times and other publications, and he is also an on-camera meteorologist for News 12 Westchester, New York.
Scripted by: Naeem Mustafa Mahar at 10:55:00 PM